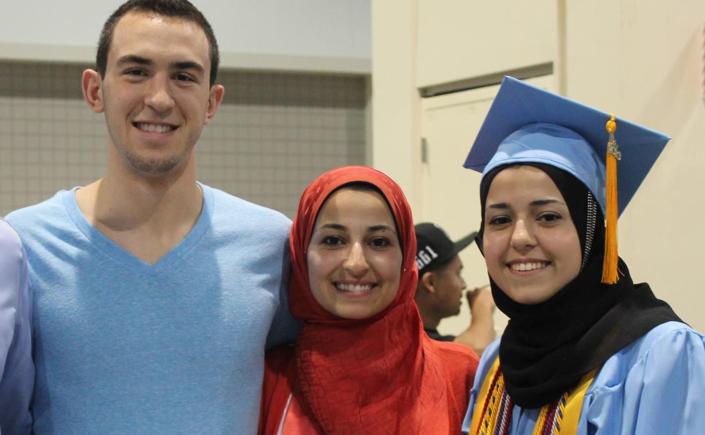 In light of what happened last week in North Carolina and Texas, this week’s story is a eerily similar look at the past of how Muslims were discriminated against in Bosnia. Personally, I feel that these authorities were hate crimes, and Muslims were specifically targeted. I have lived through this in Bosnia. But I pray that the families find teh strength and guidance to continue to live and get through this tough time and that the mosque in Texas is rebuilt soon. I pray that the proper authorities take action and investigate the situation fairly and thoroughly. For articles to the two incidents I am referring to please see:

And if you can, please visit Deah Barakat’s Go Fund Me page where he was collecting funds to provide much needed dental care to Syrian refugees in Turkey. These refugees have been on the run for four years because of the war in Syria and have no money or proper access to dental care. Let’s continue this great humanitarian effort in Deah’s honor:

It was cold February 1995. I tried to call my sister but the phone had no sound.  I checked the phone cord and the plugs at both ends.  Everything seemed fine, but the phone was dead. “The telephone worked last night,” I mumbled to myself. “So, what is wrong this morning? This cold weather we are having must have damaged the wires.”

I walked over to the window and looked at the early morning sky, pale blue, almost white, that mirrored in our icy garden. The sun seemed frozen, and its light was weak in the winter cold. A few people were walking down with their clouds of white breath coming out from their hidden faces. What are they doing in this cold? Are they fixing the wires for our phones?

I dressed warmly to go to work hoping that the phone problem would be repaired by the time I returned home. I met my neighbor, Mrs. Fetah confused, as if she was looking for guidance in a chaotic world.  “Is your telephone disconnected? I met Serbs who are disconnecting Muslim’s phones,” she whispered.

“Disconnecting?” I couldn’t comprehend it. “Oh, I thought they were fixing them” I paused. “Yes, my telephone is dead. I checked everything but couldn’t seem to figure out why it wasn’t working.”

“We are cut off from the world, completely vulnerable and unable to call for help,” she whispered. Fear and anger covered her face.

The anger and cold had squeezed my skin tight against my bones, and my eyes bulged like ping-pong balls. “My husband and daughter call me every week from the United States. I cannot afford to call them! What should I do now?”

“Maybe people in Merhamet can help you out,” said Mrs. Fetah softly.

When I got to Merhamet, my co-workers’ first question was, “Is your telephone disconnected?”

I realized that our entire work force was cut off. Everyone in the office was obviously worried.  We had all lost hope that this terrible war would end any time soon.

Sanela tapped my shoulder and said, “You must know somebody in the Government Building, your ex-students or ex- co-workers. Go there and question, protest, do something! They could help us and connect our phones.”

“I know Ratko Micanovic, the former teacher from our high school. I am surprised that he holds a position in the ministry in the Serb government. He was aloof, almost antisocial in the school.” I shook my head. “I will go and talk to him, but I am not optimistic.”

Mr. Bacic turned his head and said, “In this defective society people do not fit their position personally, nor professionally. As Muslims we don’t have any legal way to fight for our rights and justice.”

I walked to the Government Building recalling my pain when I fought to save my wheat crop and when I attempted to travel to see my daughter. My stomach churned and my heart raced the entire way.

As I entered Mr. Micanovic’s office, the stale air stank of cigarette smoke and liquor made me uneasy to breath. My former colleague sat rigid behind his desk, furrowing his brow as he attempted to manufacture an artificial smile. An antique wooden clock on the wall behind him ticked away the seconds.

He frowned fiercely, when I mentioned the disconnected phones. “Have a seat, Mrs. Softic,” he said. “All my life I have had listen to the disgusting stories of how the Turk-Muslims treated Serbs. They took Serbs’ kids from their mothers and raised them as Muslims. Mehmed Pasha Sokolovich was one of those kids. Can you imagine how Serbs react to the memory of those brutalities?” His eyes revealed hatred, and his voice found courage as he spoke. “I swore to God and myself that I’d take revenge, that I will do the same to Muslims as they did to Serbs hundreds of years ago.” He kept on talking, but I was no longer able to listen to his words. My mind was spinning, caught in the tornado of his blind hatred.

I felt a shiver in my legs, and I stood up. I realized that there was no way we were going to be able to have a useful discussion. I came to him with a specific problem, and he purposely avoided it by immediately launching himself into a hate-filled discussion of an injustice that took place long before either of us was born. Why should I pay in 1995 the price for what happened hundreds of years ago?

“I cannot help you,” he interrupted. “My mother-in-law is Catholic. Her telephone has been disconnected also. Can you imagine how my wife feels?” For a few seconds he moved his lips in a wild, shrieking laugh. “But I can’t change anything. I have to follow Serbian policies uncompromisingly.” He frowned and shouted in a gruff, mannish voice. “I cannot treat you as a former colleague. I think of you as my enemy from hundreds of years ago.”

I tried to think to bring light to his darkness. I was ready to tell him that angry people attempt to harm one another and that anger is not healthy, but his telephone rang. He ignored it and finished his ominous lecture. “We don’t trust Muslims.” He smiled a little bit. But that shadow of a smile disappeared and his voice became stern.  “We have to finish our job. Our Republic must be cleansed of Muslims. Because of international pressure we will have to keep two to three percent of the Muslim senior population, but they will die of natural causes in a few years, and then we will be completely clean.” There was pride in his voice as he finished.

“What are you talking about,” I asked sharply. “We have to break that cycle. If we continue to plant seeds of hatred, we will continue to harvest the murder and war we see around us now!”  I stood up. “Put yourself in my shoes if you want to see my feelings. Hatred is destroying our human personality, pushing us back to middle age and to this terrible war. All of us must help each other to end this awful war and build bridges of love and humanity. We need to create Bosnia as a country of ‘one nation, under God, invisible, for liberty and justice for all.’”  I closed his door.